CITY TRAIL turnout in 20212022 edition satisfactory, but there will be no summer runs – Outdoor Magazine

CITY TRAIL: turnout in the 2021/2022 edition satisfactory, but there will be no summer runs

Nearly 7,000 adults and more than 2,300 children – these are numbers showing the scale of the CITY TRAIL cross-country running series with Nationale-Nederlanden in the 2021/2022 edition. This is the first full season played since 2020, the beginning of the coronavirus pandemic. Although the numbers are satisfactory, the organizers decided to abandon the summer running series – CITY TRAIL onTour. “Cross-country five” will return in the fall of 2022.

The breathlessness of the running events market

CITY TRAIL is a series of cross-country runs, held in ten cities: Bydgoszcz, Katowice, Lublin, Lodz, Olsztyn, Poznan, Szczecin, the Tri-City, Warsaw and Wroclaw. A total of 50 runs were held in the 2021/2022 edition. The number of so-called. person-start is 18691 – That’s exactly how many times competitors crossed the finish line of cross-country Fridays. 6527 is, in turn, the sum of person-starts in children’s and youth runs, which accompany all CITY TRAIL events. 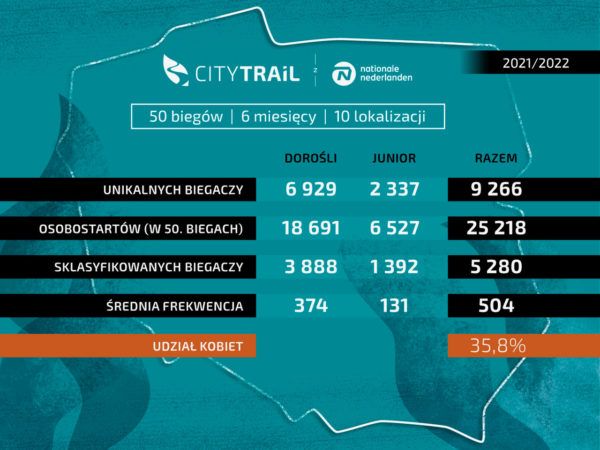 An extremely important figure is 6929. Exactly this number of adult runners (unique) took part in the autumn-winter 5 km runs, held from October 2021 to March 2022. This number is more than 2,000 less than two years ago, but considering the situation on the running market in Poland, it is a good result. As it says Piotr Książkiewicz, CITY TRAIL organizer: 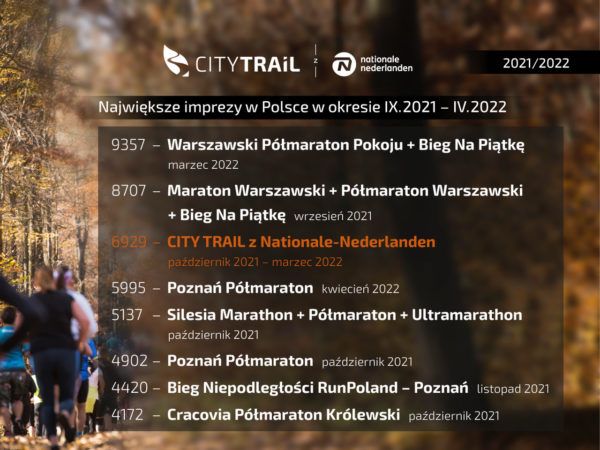 In a similar vein, the Marek Tronina – President of the Warsaw Marathon Foundation:

The situation in the market for running events has changed dramatically, but one must take into account the fact that the entire economic environment has changed. It is difficult today to have a ready prescription for our ills. I do not know if there is any other way than systematic work. And here comes the question: what kind of job should it be? Are we as organizers able to adapt to the changes that have occurred in the industry? It seems that it will be crucial and for many organizers the next two years are to be or not to be on the market. Those who find themselves in this new reality have a chance to rebuild interest in their events to pre-pandemic levels.

In the case of CITY TRAIL, it is also important to emphasize the number that speaks about the regularity of runners – that is, the number of classified people. In the main race it was 3888 runners. In CITY TRAIL Junior runs – 1392. That’s how many participants showed up at CITY TRAIL competitions at least 3 times from October to March. The average turnout at CITY TRAIL events with Nationale-Nederlanden was 504 runners – 374 in the 5km run and 131 in the junior events. Women account for nearly 36% of participants in CITY TRAIL.

In each of the aspects described above, CITY TRAIL is recording declines. In the main race they amount to approx. 23% relative to the 2019/2020 season. The situation in Poland’s largest running events looks even worse – the Warsaw Half Marathon recorded a drop in attendance of about. 42%. Similarly, the Poznań Half Marathon. In the Cracovia Królewskie Half Marathon, the drop was over 50%. Justyna Grzywaczewska, PR&Concept Manager of the Step into Nature Foundation, which is the organizer of CITY TRAIL and the ultra runs Chudy Wawrzyniec and TriCity Trail assures:

The aging of participants can be seen not only in running, but also in triathlon competitions. In the years before the pandemic, CITY TRAIL was dominated by 30-year-olds. However, in the 2021/2022 edition among men, the most numerous group is already men over 40. year of life. They account for 36.7% of participants. Among women, the K30 category remains the most numerous, accounting for 37.6% of participants. Unfortunately, female and male runners in the youngest age categories are declining. 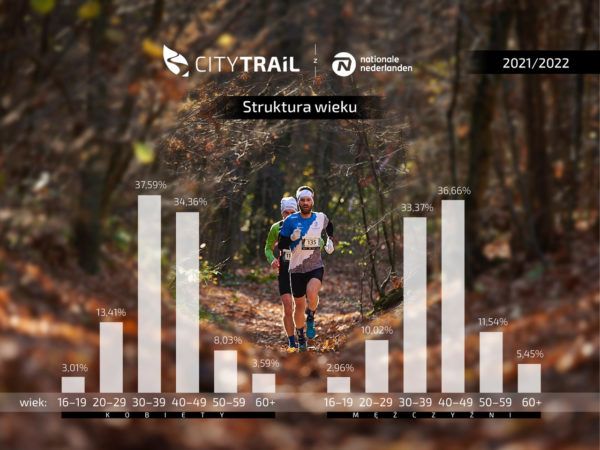 A decidedly more optimistic thread in CITY TRAIL is the one about the level of sportsmanship. It was extraordinary. Lifetime records were broken, and within the top leaders fierce competition resulted in excellent results. A number of route records were set by their authors: Dawid Malina in Katowice (15:13), Damian Swierdzewski in Lublin (16:06), Oliwia Wawrzyniak in Poznan (16:44), Wojciech Piwowarczyk (16:59) i Milena Sadowska (19:34) in Szczecin, Marta Lagownik (18:34) in Gdansk, Monika Dubiella (18:47) i Wojciech Serkowski (16:05) in Gdynia, Dariusz Boratyński (14:25) in Wrocław. Especially noteworthy is Darek’s result, which is the best ever recorded on CITY TRAIL routes. The level turned out to be so strong that on one of the runs in Lublin as many as four competitors ran faster than the then current course record. The most stable did Sebastian Nowicki, who as many as five times went below the fifteen-minute barrier (including four times in Poznań). This past season saw the most results ever better than a quarter mile. 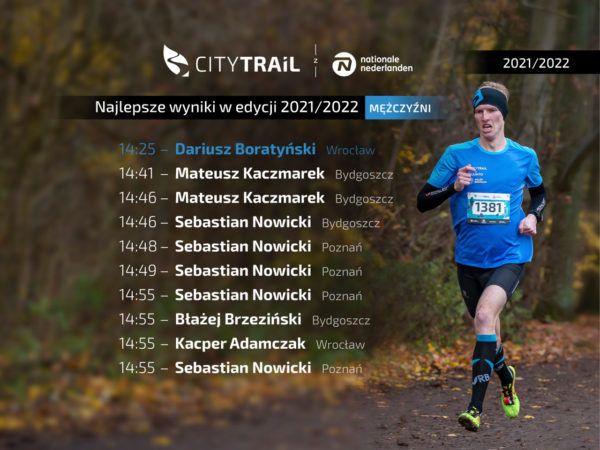 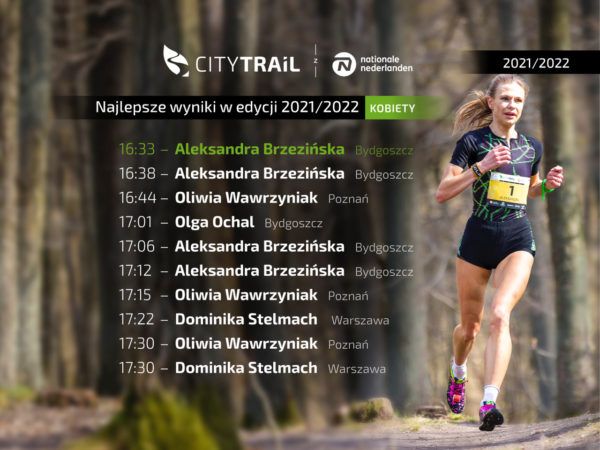 To meet the needs of the runners, after several years, the organizers realized the plan to confront the leading runners from all cities in one place. The last, accent of the season was the run CITY TRAIL Gold. The finals were held in April in Bydgoszcz, on a spectacular, varied route consisting of three loops. The opportunity to race with the best and high financial rewards gathered at the start line a significant number of leading competitors. The level, as expected, was high. The first, historical winners were Marta Lagownik i Darek Boratyński

An important element in CITY TRAIL with Nationale-Nederlanden is charity work. Starting in 2020, the organizers will cooperate Forest Forever Foundation. During the 2021/2022 season, runners once again expressed their concern for the environment. The collected amount of PLN 32,500 will allow the planting of more than half a hectare of forest! In the words of Justyna Grzywaczewska:

The second element of our non-standard activities was to support the collection run by the Polish Humanitarian Action for Ukraine, which is covered by warfare. From February 26, for five consecutive weeks, we transferred the amounts from the start fees from the race office to the fundraising account. In this way we supported Ukraine with the amount of PLN 13,700. 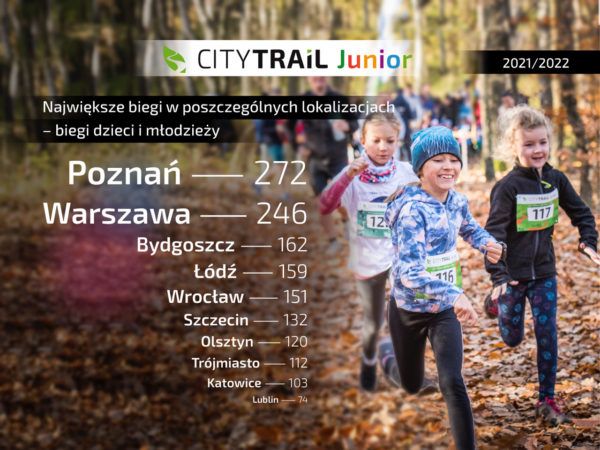 During just over five months of the CITY TRAIL Junior series, a total of 2 337 children, among whom 1 392 were classified. The average turnout for a single run was 131 children. The largest runs of the edition were held in Poznań – 272 participants, Warsaw – 246 runners and Bydgoszcz – 162 runners, respectively. 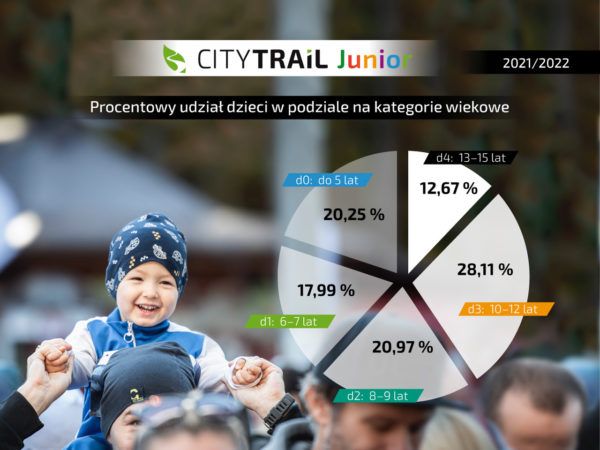 Just as before the pandemic on the scale of the entire cycle, the most numerous age group in CITY TRAIL Junior runs was the one in the range of 10-12 years old – Participants of this age accounted for 28.1% of all young runners.

Summer edition of the series disappears from the calendar, but there will be ultra runs

Since 2015, CITY TRAIL organizers have invited runners to cross-country routes not only in autumn and winter, but also in July. During the 10-day CITY TRAIL onTour they visited 10 cities, where they organized 5 km runs and competitions for children and young people in the afternoons. Piotr Książkiewicz emphasizes:

Subsequent world and national events meant that we had to decide to remove the summer series from the calendar. The market situation makes it necessary to change the approach to the organization of running events and calculate much more strongly. This does not mean that we rest during the vacations – we organize two ultramarathons.