The fifth – the last scheduled CITY TRAIL runs with Nationale-Nederlanden for the 2021/2022 edition – in Poznań, Lublin, Szczecin and Łódź took place on the weekend of March 5-6. The competition concluded the sporting part of the event in these cities, but was not the last event of the series. Competitors who ran regularly – completed at least 3 runs – will meet again at the medal and prize-giving ceremony. It is worth mentioning that the starting fees from the race office of all CITY TRAIL runs in March will be donated by the organizers to help Ukraine.

Saturday’s 5km run attracted 539 participants. The fastest turned out to be (for the fourth time in the edition) – Sebastian Nowicki, with a time of 14:55. It is Sebastian who is the triumpher of the general classification of the.

– After the run as well as during I felt very good. Unfortunately, during the run I got caught in a rather strong cramp in the abdominal area, which caused me to repent after running up to the finish line. Such things unfortunately happen, but the important thing is that, despite everything, I still keep my level and do my job. I wanted to brush up today before the upcoming 10 km start, which is next Sunday. Preparations for the season went very well. With the coach, we realized the objectives. Now all that’s left is to wait for the upcoming starts and recover well – said after the competition Sebastian Nowicki, who became a dad in February. – The birth of a child turned my world upside down, in a positive sense of course. I always wanted to be a father. The fact of Olivia’s birth gives me a “kick” into action. I am totally in love with it. Sleepless nights, etc. Are included in the child’s upbringing. But my wife and I are doing well, so we can both realize ourselves. 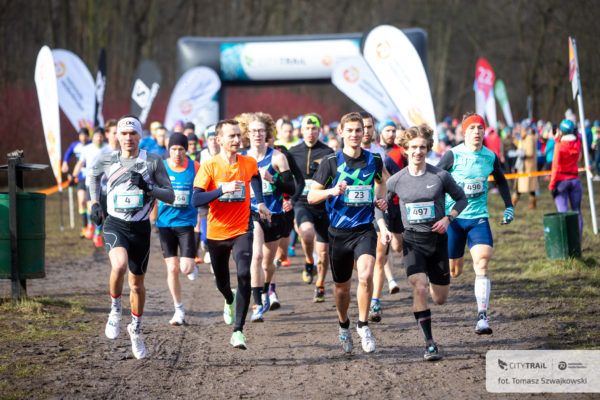 Among women, the first to cross the finish line at Poznan Rusalka was Patrycja Talar – The fastest also a month ago, second in the women’s general classification. Her score was 18:26. Second place went to Aleksandra Bereśniewicz (time 18:38), and third place was won by Ursula Kafarska (result 19:00). In the “general” the winner was absent this time Oliwia Wawrzyniak.

On the Poznań route appeared Julia Dias from Gdynia, who regularly competes in the Tricity version of CITY TRAIL. – I’m in Poznań for the weekend, so I decided to take the opportunity to check out the CITY TRAIL location, which is new to me. The Tricity routes are definitely more demanding, here on the Rusalka River you can actually speed up, although the mud on the paths was an obstacle. Anyway – I liked it! – said right after the run Julia Dias, m.In. Twice the third woman in the general classification of CITY TRAIL in the Tri-city area.

CITY TRAIL runs are also competitions for children and young people at distances from 300 m to 2 km. 211 young athletes took part in the Poznań run.

– I started in CITY TRAIL for the first time this season. I assumed to run better than the result I got during my last start (17:10 in March 2020). The final result is remarkably good, 16:21 in a solitary run gives you an idea of how it could have been in a stronger cast. I have no specific plans for the coming months. I have been familiar with the CITY TRAIL cycle since it began in Lublin. In the 2013/14 season I took third place here, and a year later I was second overall. I don’t rule out competing next season, but it’s hard to say how my plans will line up – I’m not sure said after the competition Michał Biały.

The second place was won by Krystian Kuna (17:07), and third was Mateusz Utnicki (17:14). The winner of the overall classification is absent on Saturday Damian Swierdzewski.

Among women, she was the first to cross the finish line at Zemborzycki Reservoir Natalia Zych, who thus secured victory in the women’s general classification. Her result was 18:50.

– I’m happy with another victory in the general classification. I wanted to run faster than my best result so far on this route (19:15 in 2020). It was more than successful. Certainly the conditions were favorable today for fast running. However, I did not know what to expect exactly. The autumn-winter season was difficult, I was sick a little, I had an injury, but it turns out that my disposition is at a good level. After the CITY TRAIL season, I am starting to think about my target sport, which is triathlon. I come from swimming, I like the bike the most, but the running itself also comes out decently – emphasized at the finish line Natalia Zych.

The second place was taken by Beata Klimek (time 19:18), and third place was won by Dominika Łukasiewicz (result 19:37).

The local co-organizers of the run in Lublin are InesSport and Perfect Runner Team.

264 people took part in Sunday’s 5 km run. The fastest turned out to be (for the third time in the edition) – Wojciech Piwowarczyk with a time of 17:09. It was Wojciech who triumphed in the general classification.

– I rate today’s run as the best in my performance, even though it was not the fastest. I felt very good, I controlled the situation from the beginning, I didn’t have to turn up the pace, because it turned out that my rivals didn’t press today. I’m glad that I finally managed to run in CITY TRAIL on a regular basis, because so far I’ve only competed in single events. I also plan to take part in the national final – CITY TRAIL Gold, which will take place in April in Bydgoszcz – said after the competition Wojciech Piwowarczyk.

Among women, the first to pass the finish line at Lake Emerald was Justyna Grzywaczewska – Second in the women’s general classification. Her result was 20:05. Second place went to Karolina Jahnz (time 21:02), and third place was won by Edyta Dydek (result 21:43). The “overall” winner was the absent this time Milena Sadowska.

On the Szczecin route appeared Zbigniew Bodnar, regular CITY TRAIL participant. – It was on CITY TRAIL that I started my running adventure. That was in 2018. I turned 70 and decided it was time to try running. I have always been active, cycling a lot. My running beginnings were marching at the nearby speedway stadium. The lap is 300m and at first I wasn’t able to run the whole thing without a break, but I was patient, with small steps I pushed my limit and lengthened the running sections, shortening the ones covered in walking – recounted the competitor at the finish line.

114 young athletes took part in the children’s and youth competitions.

Sunday’s 5 km run was attended by 246 people. The fastest turned out to be Adam Świrgoń with a time of 16:31. The second place was won by Pawel Kopaczewski (16:47), and third was Mariusz Pabich (17:03). The winner of the overall classification is absent this time Grzegorz Petrusiewicz.

Among women, the first to pass the finish line in Baden-Powell Park was Dominika Wiecha – winner of the women’s general classification. Its score was 18:21.

– I’m glad that I was able to improve the best result I achieved on this route. I am in high shape. A week ago, during the half marathon in Wiązowna, I improved my personal record by 4 minutes. It currently stands at 1:19:11. I did not expect such a good performance. During this run I also set a personal record for 10 km. I passed the second dwy in 36 and a half minutes. The nearest starts are the academic championships of Poland in cross-country running and CITY TRAIL Gold, i.e. the national final of the series, which will take place in Bydgoszcz – said at the finish line the fastest of the women – Dominika Wiecha.

The local co-organizer of the run in Lodz is InesSport.

It is worth mentioning that the entire amount raised at the race office over the weekend will be donated to help the Ukraine – will go to Polish Humanitarian Action. The collection will also continue in other CITY TRAIL locations, namely Bydgoszcz, Katowice, Olsztyn, Tricity, Warsaw and Wroclaw. The next runs are scheduled for March 12 In Olsztyn and March 13 In the Tri-City (on the Gdansk route).