European Running Festival 2022 – HOKA, Coros and GU are preparing a power of attractions

To the start, ready… the European Running Festival will start already on June 24. For the 3 days of the event, Krynica-Zdrój will turn into the capital of runners – both professional and amateur cross-country skiers. The main technical partner of the festival is HOKA, time measurement will be carried out by the Coros brand. And energy will be added to the competitors by the GU brand. What the sponsors have prepared during this year’s EFB?

The main event of the European Running Festival is, of course, the runs taking place over seven distances. The most demanding of these is the Krynicka Setka, where, over a distance of 105 km, runners have to overcome an elevation of 4,500 m in total. If the notorious Hundred is too much, you can always opt for any of the less demanding runs, including the Małopolska Rekordowa Dycha (10 km) or the new – Crazy Eleven (11 km).

Exhausting straight and strenuous uphill runs are not all, however. As every year, the festival will be accompanied by a number of additional attractions. This year the main technical partner HOKA is preparing a competition #FlyHumanFly, In which anyone with a social media account can participate. There are 3 pairs of brand-new HOKA Speedgoats 5 to be won.

As the main technical partner, HOKA is also preparing the Chillout Zone, where runners will be able to relax after the race. For weary runners, the technical partner has prepared the possibility of massages – as well as cold drinks and good music. All those who would like to try on the manufacturer’s shoes will have the opportunity to do so at the EXPO stand. 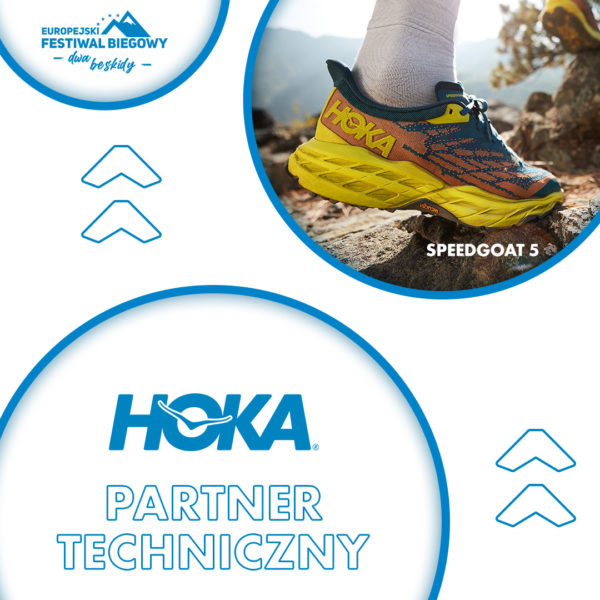 Sports watch brand Coros will also have its booth at the festival. Anyone with a dream of the new Vertix 2 model will have a chance to win the watch in the Corosa Run-up competition. Up to 2 pieces to be won – for the first place in the Men’s category and the winner in the Women’s category).

GU brand will take care of the participants of this year’s EFB both at nutritional points and in the Chillout zone, where you will be able to try some of the brand’s products. In addition, competitors
They will find GU energy gels in their starting packages to strengthen them during the run.

On the last weekend of June in Krynica-Zdrój you will be able to meet representatives of the Hoka Garmin Team, consisting of Robert Faron, Cezary Baliga, Aleksandra Bazułka, as well as Miśka Witowska or Kamil Leśniak. Be sure to high-five them if you meet this team on your way already on June 24-26 in Krynica-Zdrój.

We are already looking forward to it – we see you at the start!

ABOUT HOKA ONE ONE

HOKA ONE ONE is a manufacturer of specialized running shoes, popular especially among long-distance runners. Among them, it is one of the fastest-growing sales brands in the world. However, it is also valued among amateurs, just starting their running adventure. The hallmark of the footwear is the unusual construction, associated with the use of an extremely thick foam sole, which translates into a maximum degree of cushioning. Other typical Hoka One One features include a boat-shaped design, low foot placement in the shoe’s frame, minimal weight and rich colorways. The brand was established in France in 2009 and since then has been successively conquering new markets. From season to season, the manufacturer successively improves the most popular models, as well as introduces new proposals. The key models are the trail-oriented Speedgoat 5 (also available in a GTX version), the urban Clifton 8 and the Challenger ATR 6, which combines features of both of them. Since the spring of 2016, Hoka One One has been available in Poland, and its exclusive distributor for Poland is RAVEN, a company based in Krakow.